Mount Cheaha and The 29th Ramblings

Perhaps the title is a bit misleading...Mount Cheaha 50K was the 25th of February; however I am writing this on the 29th. And come on, it isn't often that we can do something on February 29th.  Well more than that, I had to get on a plane and fly to New Mexico the day after the race and just now have had time to sit down.

The race itself was another depressing venture into the reality of my age.  Mount Cheaha is a beautiful course and I enjoyed that aspect of it, but I was so fatigued near the end that I could have literally laid down beside the trail and fell into a deep sleep.  I think 'racing' back to back ultras needs to be put on hold for a while.  Pound for pound, Mount Cheaha is one of the most challenging, while providing the most gorgeous views, of any race in the South.  The vista near the top of Preacher Rock across the verdant valley below is simply breath taking. Plus the mile climb up 'Blue Hell' at around 28 miles is well...just check out the picture of the part that is not too steep...yes it gets worse...much worse... 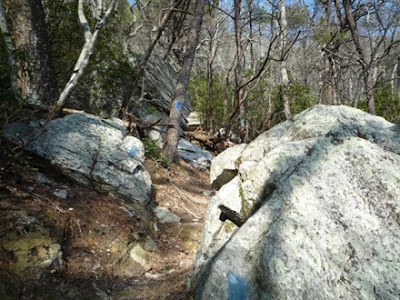 So, with the lactic acid still burning in my legs, I flew to New Mexico for a week of working in the desert.  Two or three times a year, I get to leave the desk in the simulation lab and actually get 'dirty' doing various things in the 'field.'  Usually the tests are hours away from any civilization for safety reasons...so packing a few bottles of water and a few peanut butter sandwiches is a necessity.  After eating dust from the desert winds and screaming from grabbing Yucca bushes and other desert plants that do not want to be touched...I was almost ready to be back in the lab.  Almost that is...luckily we finished early on the 29th, and with the idea of doing something on that rare day, I hiked through the Rinconada Canyon of Petroglyph National Monument near the city of Albuquerque (and no, I did not take a wrong turn doc). Unlike my usual too fast a pace to notice the details, I actually walked slow and took advantgage of the time to view the 700 year old Pueblo Indian carvings in the volcanic rock. There are hundreds of these...here are a few from my camera phone: 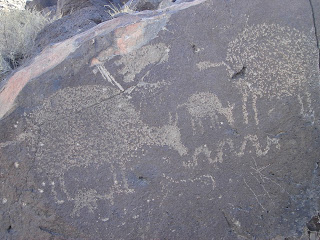 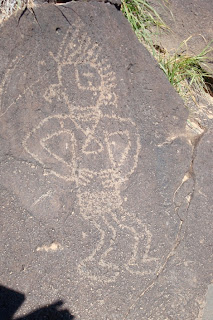 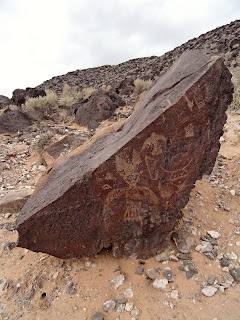 The hike was really 'cool', but since time refuses to stop, I was soon back at the hotel knocking sand out of my shoes.  One last adventure waited on the 29th in that I hit one of Guy Fieri's 'Diners, Drive-Ins, and Dives' suggestions.  I scafred down a feast of blue corn meal enchiladas, refried black beans, and some crazy rice dish all seasoned with green chilis...I considered actually licking the plate, but I do have some dignity, that and there were too many people around.

After a cramped flight and maddening dash through the airport to catch my connecting flight, it was nice to see the sign "Welcome Home Daddy" pasted on the back door of the house.  Hey, I have teenaged daughters, I was expecting "Oh, Are You Back Already?"
Posted by DeWayne at 10:38 AM No comments:

Time is a cruel mistress, yet without it how would we function?  I have spent quite a span of time in the sport of ultrarunning.  My mind still flows with the giddiness of a teenager on a first date, but my body requires 'extra' attention when it comes to putting my feet to the trail.  My left hamstring has been 'tight' for so long that I am sure it is nothing but scar tissue at this point.  Indeed my stride length is probably half of what is was 'back in the day.' Hmmm, 'back in the day', another time reference, another reminder that the future is closer than it seems.  But what can you do...you can either sit around lamenting about your frailties, work on overcoming them, or learn to live with them...either way time will keep on ticking.

This year's Black Warrior 50K trail race marked a statistical point for my running.  Useless information to most, but since running is a big part of my life, it is something to which I pay a modicum of attention.  The win marked the 19th consecutive year in which I have won an ultramarathon.  That knowledge and about five dollars will get you a cup of coffee at Starbucks...well maybe you don't need the knowledge.

Black Warrior has an 'old school' race feel.  Lots of familiar faces with the same sickness as I.  We all gather around the campsite area and find something to complain about (in a good, jovial way). Then one has to make their way just under 1/2 mile just to get to the starting line.  I find it funny the amount of complaining I hear about that short walk, when we are about to run 31 miles.  The race lends itself to speed, when the course is dry; however when the rain has saturated the ground and the horse traffic has pounded sections of the trail into a puddy like sludge, the speed factor gets thrown into the mud along with everything else.

I had a fun for most of the race, which is nice, but I really ran out of gas after about 20 miles.  All things are relative and finish times are simply the time it takes you to finish, but each individual (who has a few races under their belts) know when a race is 'good' and when it is 'not so good' regardless of the time.  Despite the win, the race was in the 'not so good' feeling category. I fought waves of queasiness and low energy the last part of the race.  Luckily, or perhaps unluckily, I have completed enough of these races to know how to survive...it is not fun and it takes an effort to follow my rule of always smiling and thanking the volunteers, but I did. And sure enough that old clock kept ticking, and before I knew it, I was finished, showered, slept, and wrote this musing.  Time is like that, all one can do is mark it down...capture the moment...then move on with the flow.
Posted by DeWayne at 7:15 PM No comments:

Well it is time to join the world of blogging.  Although in my case it will be more of an outlet for writing...whether it be musings, short stories, articles, poems, or just streams of consciousness. Hello world, I do exist and I have something to say...however you do not have to listen.
Posted by DeWayne at 4:26 PM 2 comments: